Hummingbirds have long been admired for their beauty and the remarkable way they can stay still while still in flight as they drink nectar from flowers.

For many they also have spiritual meanings in many faiths and are said by those who believe to appear when we lose a loved one a hummingbird will appear to let us know our loved ones are OK and still with us.

It is for these reasons that we at Lovelight Urns offer a large selection of Hummingbird Urns for our customers to choose from. Our collection is comprised of urns made from wood with carved hummingbirds, metal urns with mother of pearl inlays, ceramic hand painted urns, wood with photo quality images of hummingbirds in flight and much more. 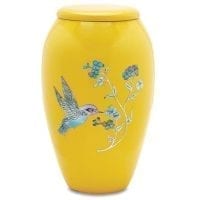 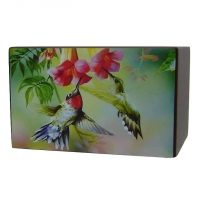 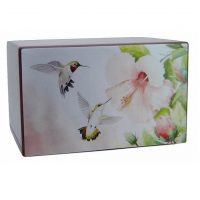 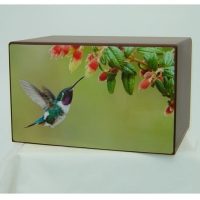 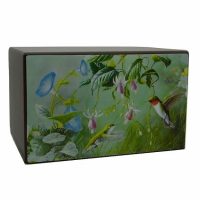 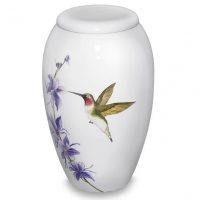 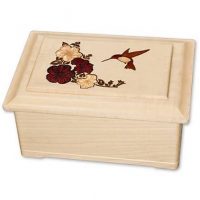 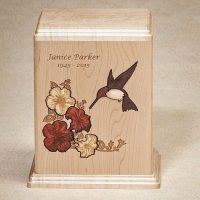 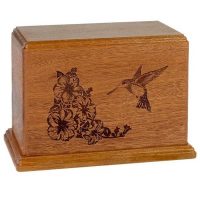 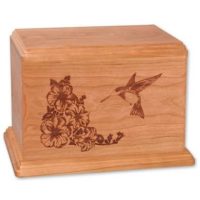 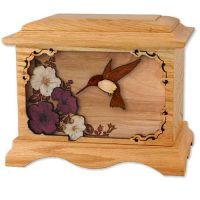 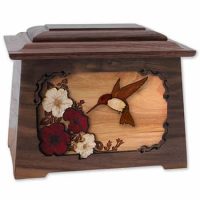 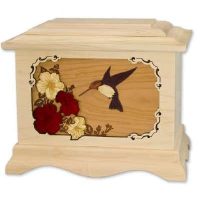 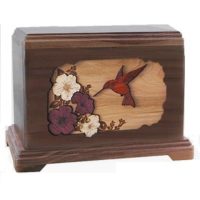 Hummingbirds fascinate almost everyone who sees one. Their tiny size, the beautiful colors and the quick rapid way they move about and hover like helicopters when drawing nectar from their long beaks.
Males usually have the most colorful feathers as do most birds to attract females. However there are some females who do possess the beautiful colored feathers of the male. Sometimes the feathers are not only colorful but have a pretty shiny, almost metallic appearing quality to them which adds to the attention called to these brilliant colors.

There is a type of hummingbird from Cuba that is the smallest bird in the world weighing just .07 ounces. In North America the smallest hummingbird weighs just under one ounce. This hummingbird is called the Calliope and are found in the United States and Canada.
Of course these teeny tiny birds have teeny tiny eggs. They can be the size of a pea that are protected by the well protected nest the mother makes made of plants and spider webs.

Hummingbirds play a large role in symbolism in many cultures. The early Aztecs believed they were messengers between they and the gods.

In Celtic tradition, hummingbirds represented strength their independence and the tireless tenacity of endless purpose as in their endless search for nectar.

Neither the old or new testament mention the hummingbird most likely because hummingbirds are not a native avian to the middle east. The closest they have is the Palestinian Sunbird, though they drink nectar they are much larger than a hummingbird. However, in more modern times, they have been considered messengers from heaven that let us know the people we love who have crossed to the other side are able to let us know that they are safe and happy and we can be at peace with their absence.