Categories
Pages
Home » All Posts » The History of Mourning Jewelry »

The History of Mourning Jewelry

For many people, the passing of a loved one or close friend can be something they would rather avoid talking about or looking at; however, in eras gone by – especially in places like New England – there was a far more open look at death. In fact, mourning jewelry was something that many people would wear as a symbol of the passing of someone that they loved dearly. To have a constant memorial to their loved ones was something that, during the 18th-19th centuries when death was extremely common due to sickness and an environment which was challenging to live in, gave them a glimmer of hope in living with what they had lost.

Rings were without a doubt the most common of the original mourning jewelry that would have been worn, and were paid for using the returns that came back from the individual who had passed on. Created from a simplistic gold band to resplendent designs complete with jewels and stunning diamonds, these rings could vary in style quite dramatically. They were all usually inscribed with the name of the person who had passed on, as well as their age when they died. However, sometimes more writing was etched in there with morbid phrases to remind the wearer that not only have they lost someone, but one day they will be lost too.

Although a rather grim and tragic item on its own, the sentiment behind a mourning jewelry set is something to be appreciated. At their most prominent time and height, they were based around the Rococo aesthetic and were typically made using enameled bands. However, as the 18th century drew to a close and started to see a shift in American beliefs of Republicanism, they moved towards a new style; following a more Neoclassical form of design.
As the 19th century started to head towards the end of its 20th year, there started to be a growing amount o f new jewelry styles apart from rings appearing as favored mourning jewelry. Things like miniatures, pendants, and brooches started to become equally popular in the style and format of the overall era. The brooches in particular are very interesting, and have woven plaits and cut curls or even feathers from the hair of the person who has passed on to make an even more indelible mark on the mourning jewelry itself.

Mourning dress was even affected by this change – for the first year of the death, only black wool was allowed to be worn and eventually small pieces of jewelry would be added as the years passed. Eventually colors started to become more prominent as time passed with tortoiseshell, onyx and various jet and gold pieces of jewelry became popular choices.

Mourning jewelry, however, took a severe hit as fashion started to move away from the morbid style that has followed in the past and went towards something a bit more positive in style – this meant that as the twentieth century came around, many people had long since stopped following the tradition and instead concentrated on other jewelry styles. 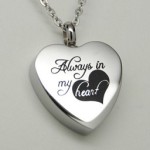 Now we have memorial jewelry and lockets for ashes.Though used for the same purposes, they have are modern look and many times have inspirational messages and or designs that look like any other jewelry. In fact what is very popular today in a modern mourning jewelry are lockets for ashes and other jewelry such as cremation rings and bracelets which allow you to place a tiny portion of ashes in the jewelry.